An amphibious reptile going after amphibians

Unlike their name suggests, Grass snakes are more closely bound to freshwater habitats than grasslands and even occur in forests as long as fresh water is somehow provided. Besides water they require a variety of elements on land in order to perform their hunting, reproduction and basking.

Their amphibious lifestyle is reflected in the shape of the snake’s body architecture in comparison with strictly terrestrial species. Grass snakes are rounder compared to the more flattened body of an Adder. A rounder body shape displaces larger volumes of water as a result of the lateral swimming motion of the Grass snake, and therefore improves its swimming ability compared to snakes with a flattened body shape. 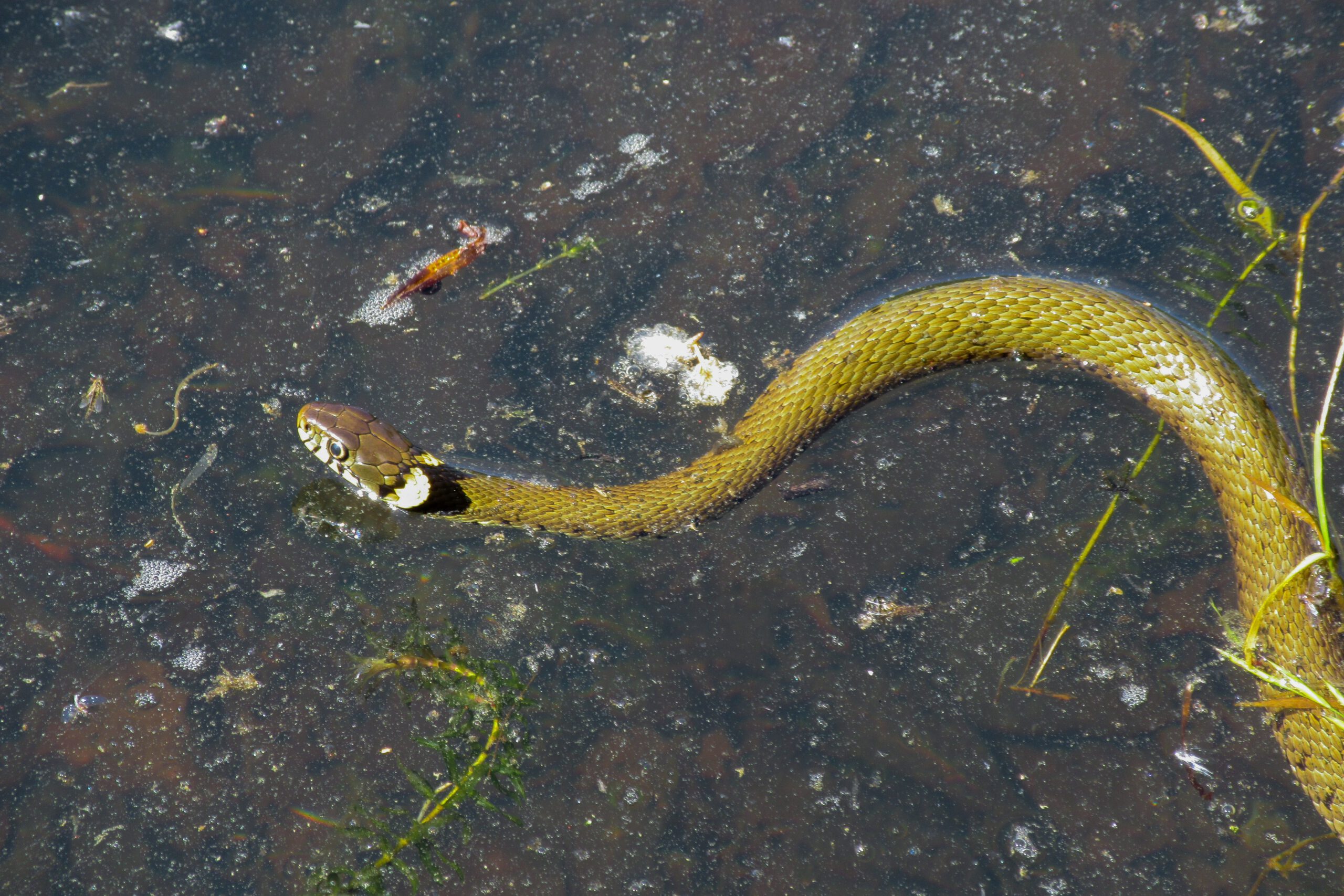 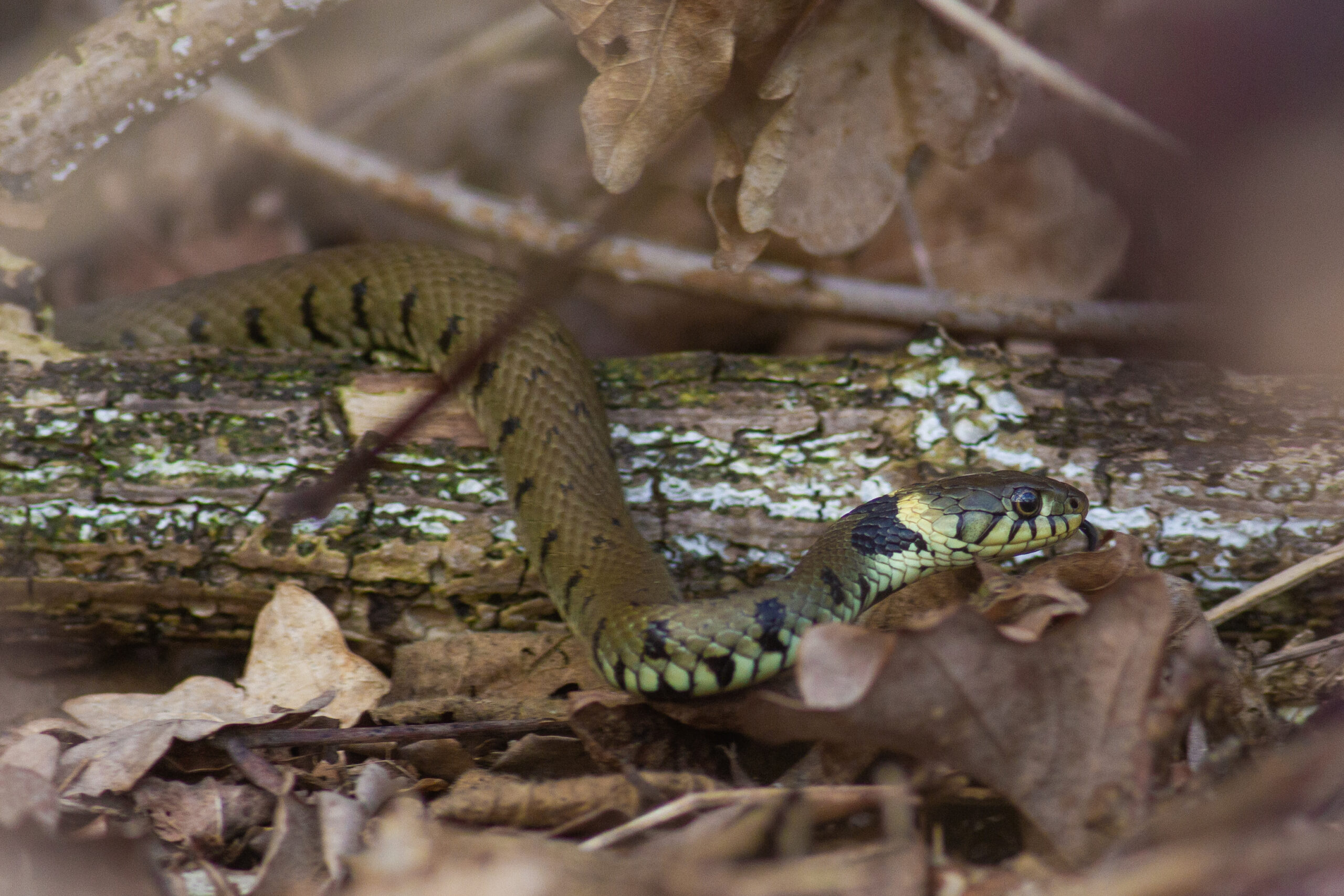 Brood heaps
Given their distribution in Europe, Grass snakes live in areas with longer summers and higher temperatures than Adders and Smooth Snakes, hence Grass snakes are still laying eggs, whereas both other Dutch snake species carry their eggs with developing embryos inside the parent’s body. The embryos of the Grass snake need a minimum temperature of 21 degrees C to develop and grow best at 28 degrees C. Therefore, brood heaps consisting of decaying plant material are regularly used in colder parts of Europe. Such heaps create more humid and warmer conditions for the embryos to develop, compared to the surroundings. 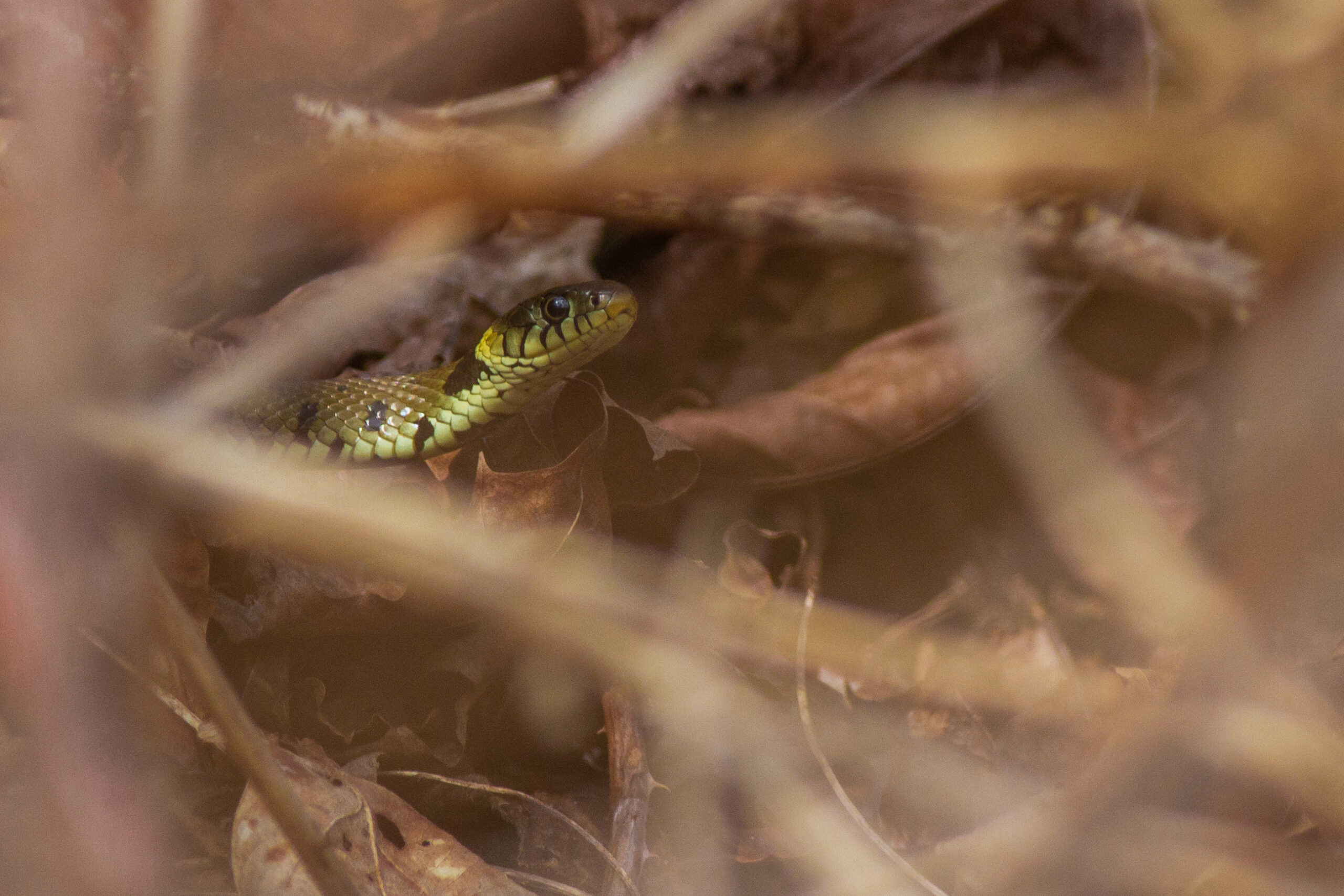 The number of eggs that can develop by producing a clutch is higher compared to the snakes in which eggs develop inside the body. However, providing an average of 30 eggs per clutch with yolk, which serves as food for the growing embryos, is a huge nutritional investment from the body reserves of a female Grass snake. The eggs are produced and stored in two very large oviducts (photo below). At the base of the oviducts thick muscular walls are involved in egg production. The ends of the ducts are made of very thin membranous tissue, which serve to store the eggs as they are ready to be laid. 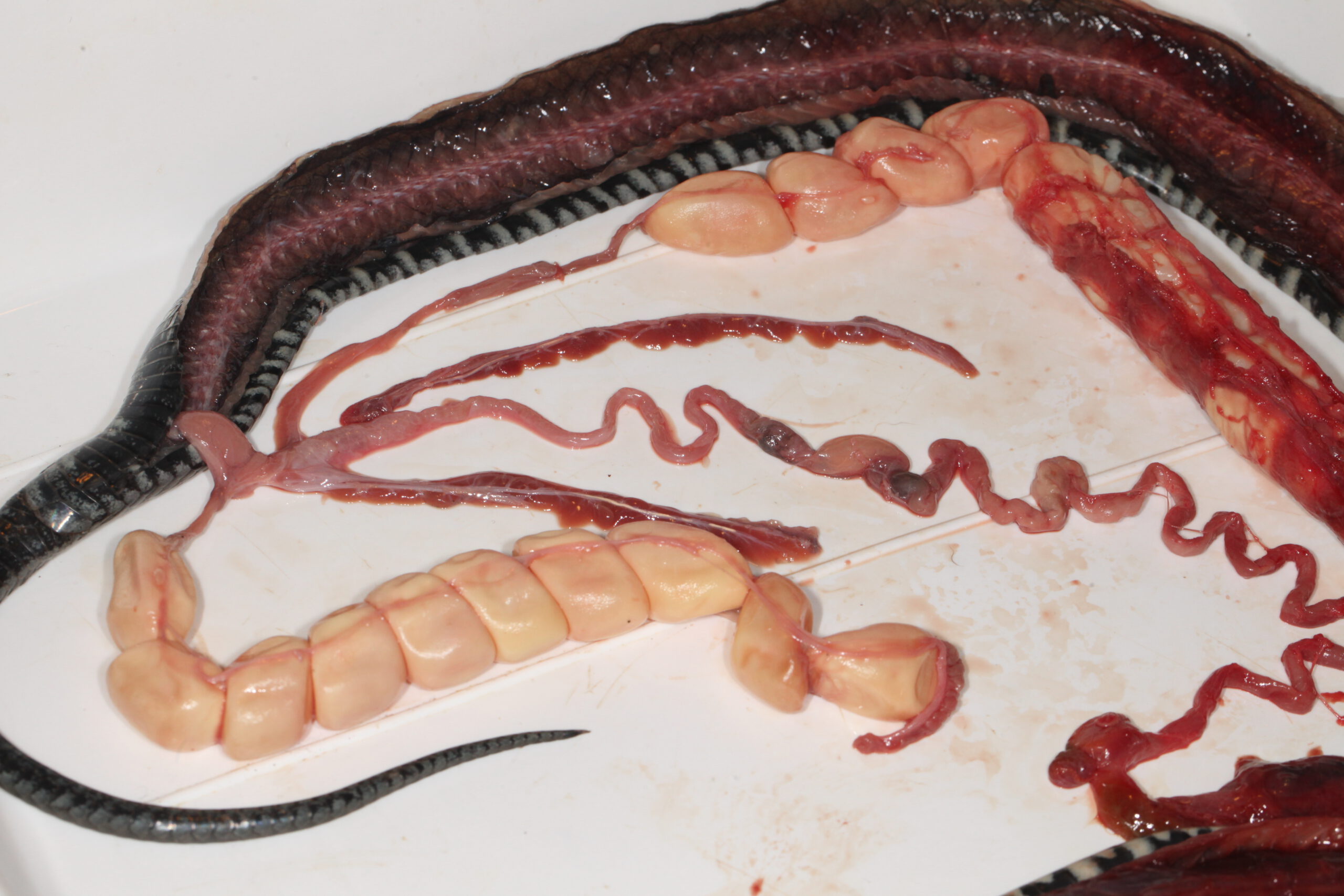 The eggs seem to hold a very compact and hardly liquid type of yolk, which might reduce eggs size at the moment of laying, but would require additional water to be absorbed into the egg from the environment during embryo development.

Hunting and feeding
Grass snakes are most active during daytime and hunt a variety of prey types in and around the water. Unlike closely related snake species, Grass snakes do not predominantly hunt in the water, but more often along the shores instead. The main food source for juveniles are water salamanders, tadpoles and invertebrates, with toads and frogs representing a larger share of the diet towards adulthood. Grass snakes hunt on sight and smell (read how snakes smell with their tongue here). Under water the use of smell is probably limited, which could restrict Grass snakes to hunt on eyesight while under water. Their eyes are equipped with round pupils and single-focus lenses, which are not at all adapted for night vision. In this respect they differ from Adders, for instance, which have slit-shaped pupils and multifocal lenses (BOX I). 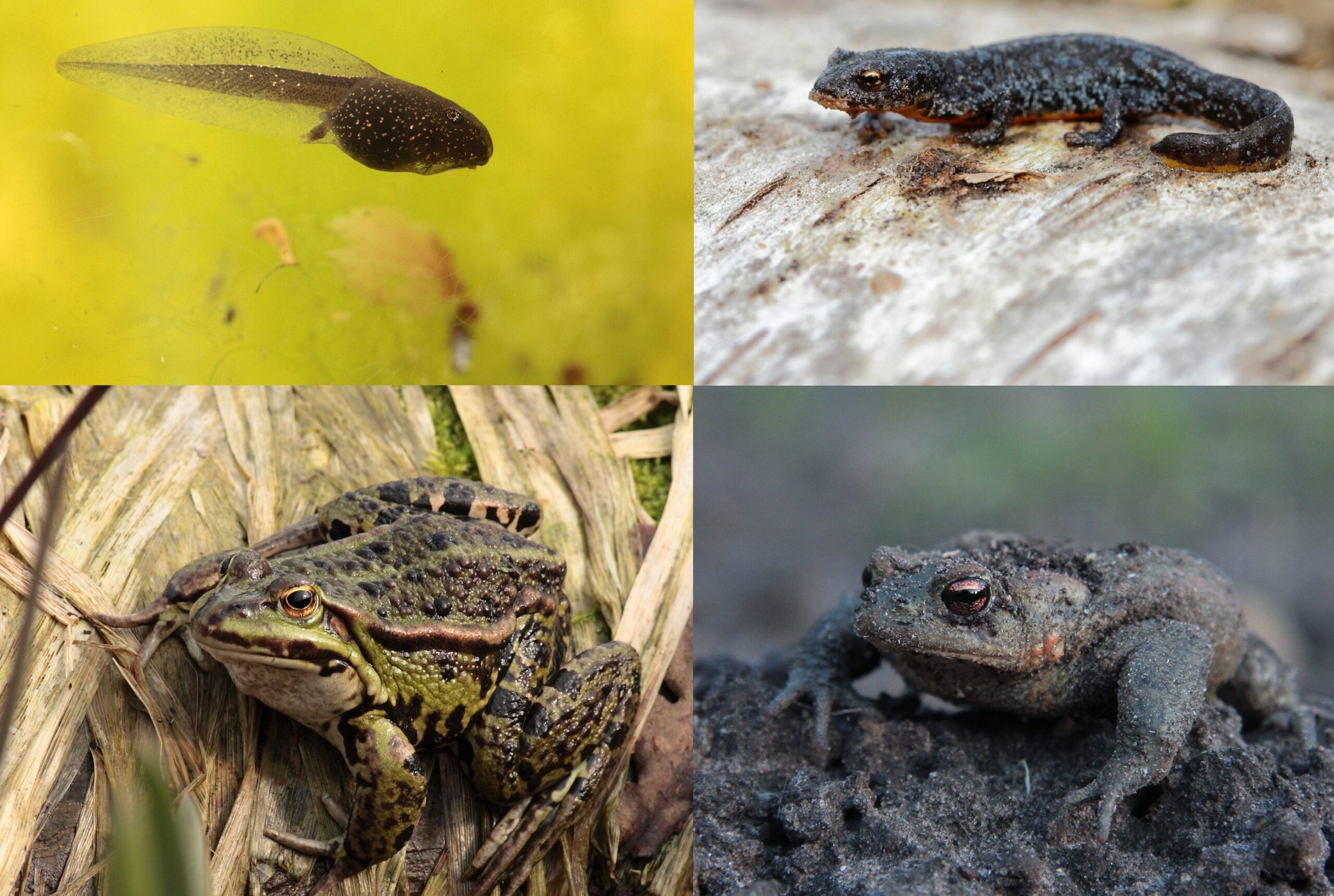 A multifocal eye lens is usually found in animals that operate under low-light conditions. It gives an animal the ability to view with a larger depth of focus.  Also, different areas of the lens are each able to focus different colours, which means that a larger range of colours can be perceived in bright light. A multifocal lens only works if also the outskirts of the lens receive light. Therefore, the pupils are slit-shaped as it enables them to shed light on the whole lens surface. Slit pupils can also close more tightly (with less light passing through), which results in the ability to handle a broader range of light conditions.

The pupil shape indicates whether a predator is active during the day or at night. The pupils of (nocturnal) domestic cats, for instance, contract to vertical slits in light conditions, whereas other (diurnal) cats such as lions have round pupils. Comparisons between snakes suggest similar differences: species active purely in the daytime, like grass snakes, do not have slits, whereas pythons and boas with mainly nocturnal lifestyles have slit-shaped pupils.

In predators, the slits are often vertical to more precisely gauge distance; in herbivores, such as goats, the slits are horizontal to scan the horizon for upcoming danger. In bright light conditions, slits result in a larger depth-of-field horizontally than vertically, which could be convenient for ambush hunters, like Adders, in detecting either prey animals or threats moving across their field of vision. Why need fangs?
Although the head is relatively small, the skull is very mobile and can widen the mouth opening extremely. Once the prey is caught, it is swallowed in one piece by moving the mobile jaws with rows of small teeth back and forth, which retracts the prey further and further down the throat.

In contrast to other snakes, Grass snakes start swallowing their prey at the tail end instead of the head. This is supposedly to be able to swallow toads that swell up as a defence mechanism against grass snakes, as it permits the air to be squeezed out back to front. Although Grass snakes are typically classified as non-venomous, in the back of the mouth, small venomous fangs are present, which only serve to secrete a poison during swallowing to aid digestion. As the frogs and toads which the Grass snake consumes do not pose any risk to the snake, this fang position is sufficient to the Grass snake. It would, however, not be adequate in for example Adders, which catch mice that will bite and fight back if there would not be instant venom injection and prey release by the snake! The digestion starts in the mouth and continues in the oesophagus, which is very long. The stomach is divided into a very large glandular part and an extendable larger muscular part; the glandular part adds digestive enzymes to the food matter, the muscular part crushes and mixes the matter mechanically.

Social pattern
Undoubtedly, the conspicuous yellow-and-black pattern behind the Grass snake’s head is what makes this species appealing to the eye. The clear markings might help Grass snakes to prevent attacks from other Grass snakes. Indeed, Grass snakes show hardly any aggression towards each other and are moreover considered social. The markings can be observed from any angle, being present on the sides and the top of the head, and youngsters have more striking markings than adults. The pattern fades with age, especially in females, which are bigger and less likely cannibalised. This indicates that the pattern might function as safety measure for other snakes and not against aerial predators, like birds. If they do get attacked, they curl up, hiss, may even play dead and excrete a foul-smelling substance from their anal gland.