This page has been made possible by Astrid Schute photography

Near-extinction and comeback
The king of European birds of prey, one of the largest birds of prey in the world, sometimes nicknamed the “flying barn door”, seems to be on a European comeback after having nearly disappeared. Persecution through hunting and environmental pollution with toxic heavy metals, organic pollutants, and pesticides drove these top predators towards extinction. Protection by law, reduction of toxic agents, and improved water quality and higher food availability helped the comeback of this species.
Although White-tailed Eagles are associated with aquatic environments, their diet includes many species that also inhabit agricultural or grassland systems, like geese and ducks. 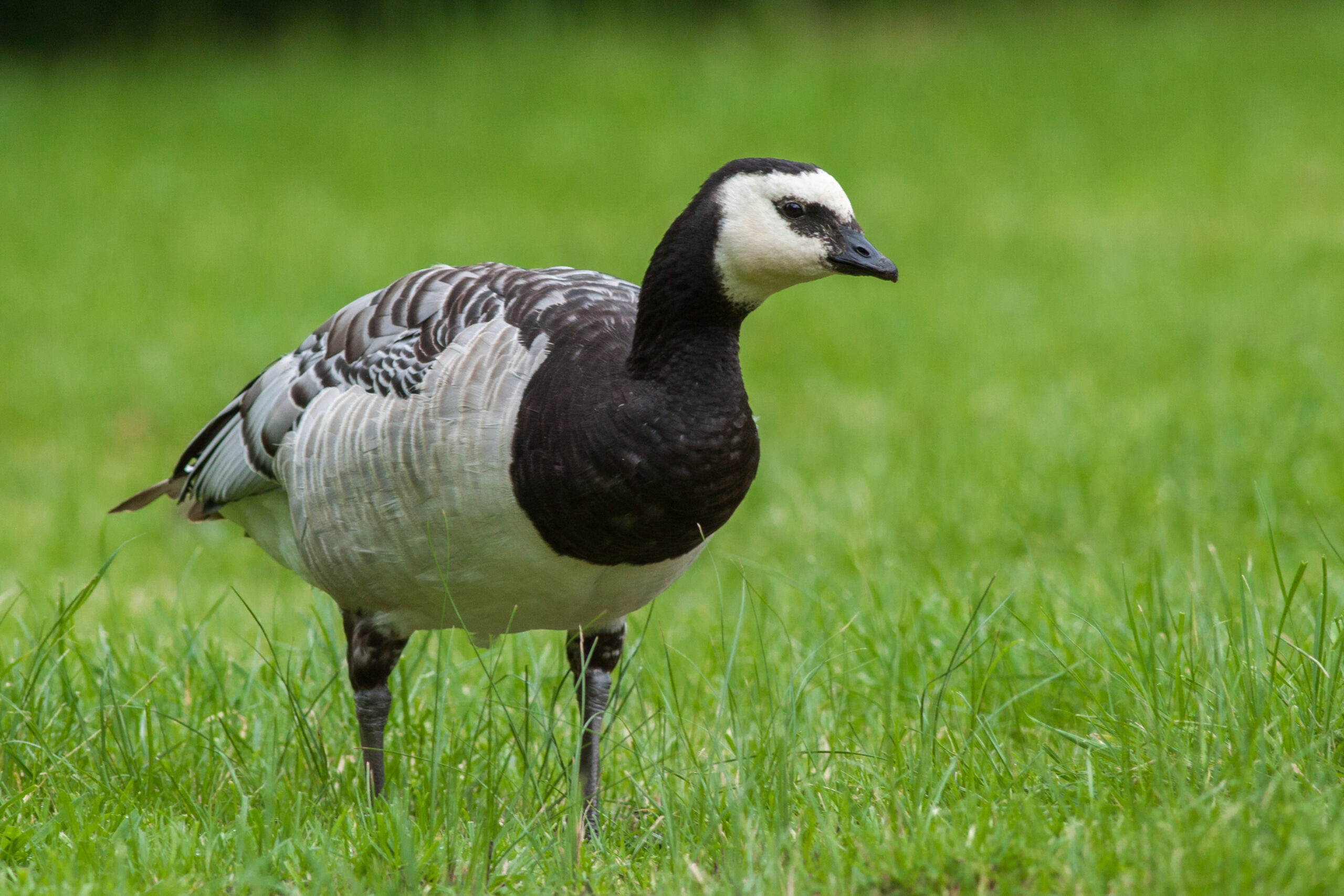 One of the main changes of the last decades in agricultural grasslands of western Europe is the production grass containing very high protein levels. By consequence, more and more geese survive the winter and some species even skip their northbound migration in spring and started to breed in great numbers in the temperate wintering areas instead. These large numbers of geese that are available year-round offer great meals for White-tailed Eagles.

Although White-tailed Eagles mainly hunt in open wetland and coastal areas, they require the presence of large trees, providing a safe place to build their enormous nest.

In central Europe, nests can be located near lakes in relatively dense forest whereas in Nordic coastal area they can be found nesting on the ground on predator-free islands. The nests may be used for many breeding seasons, and increase in size every year. Soaring for a living
The huge wings of a White-tailed Eagle are designed to soar whilst scanning for food or selecting a next victim from a group of potential prey. The breast muscles that move the wings downward have some partitioning, as can be more distinctly seen in for example vultures, albatrosses, and storks.

The largest part of this muscle is used for the downstroke, whereas the other part serves to lock the wing in the stretched soaring position, lowering the effort to keep soaring for prolonged lengths of time. 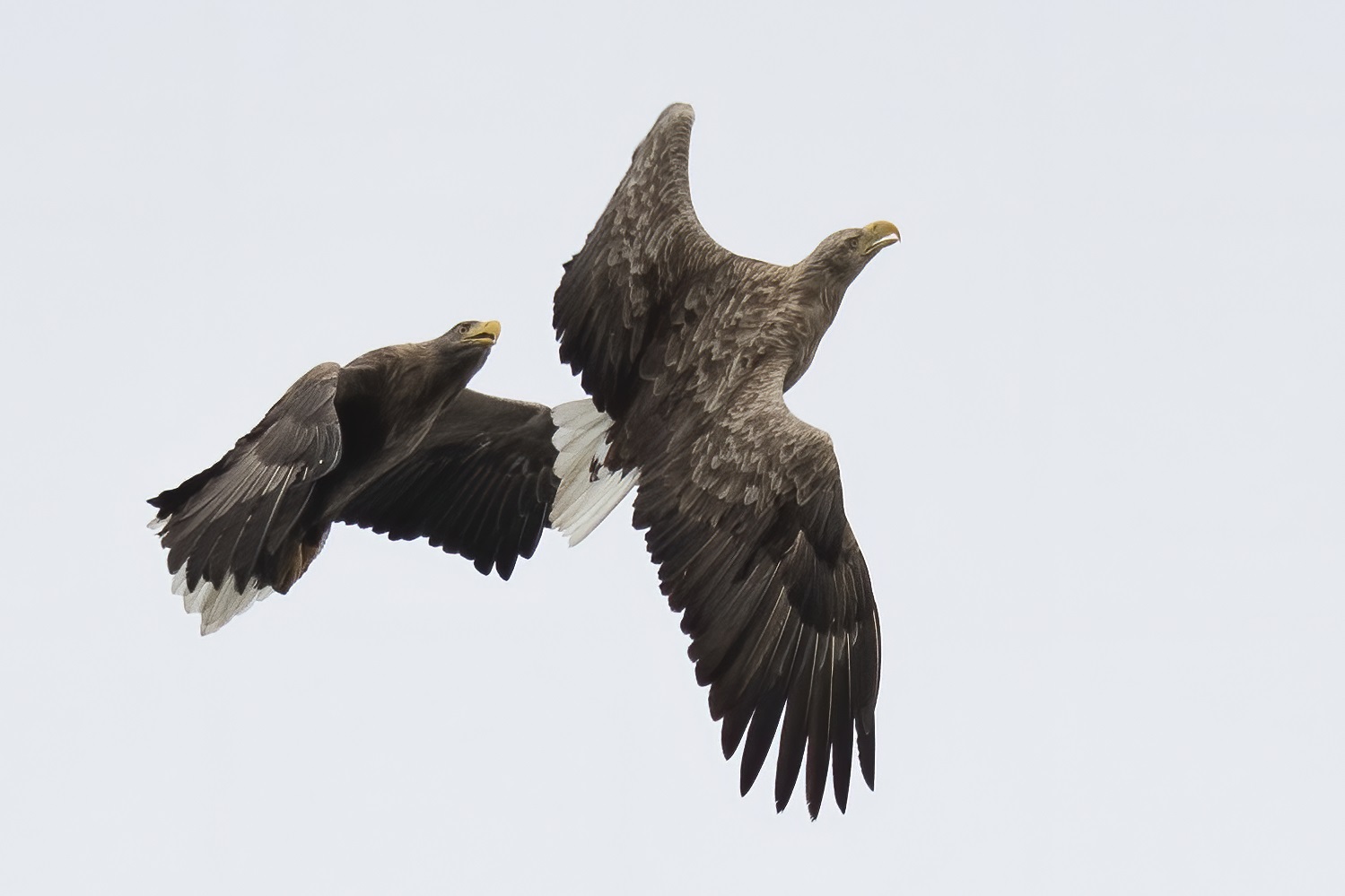 These muscles attach on the breastbone, but they do not span the entire length of the bone structure, and, relative to the bone, the flight muscles are not maximised for size as is the more common condition in most birds of prey. Also, the keel of the breastbone is not especially impressive (photo A) and as such, white tailed eagles cannot easily lift large prey and carrion from the ground or water. However, smaller fish or waterfowl are light enough to be transported on the wing and if they can get airborne flying downhill, their large wings also allow them to take along larger prey. Catching and manipulating prey
Apart from the breeding season, when they need suitably-sized prey to take to the nest, White-tailed Eagles predominantly seem to opt for large prey. The powerful talons serve to catch, hold and kill prey. Especially large prey may not die immediately and can be killed by drowning or exhaustion in combination with internal damage.

The shinbones are long and strongly built in order to attach very thick leg muscles, operating the impressive talons to crush a prey with immense force. White-tailed Eagles have a powerful and high bill to tear open large carrion or thick skins, similar to large vultures (e.g. Cinereous Vulture). Feeding on carrion is especially important during the winter in Nordic regions, where lakes are frozen over and most birds – including White-tailed Eagles as well – migrated south. Resident birds may show regional migration to sites where deer or livestock carcasses can be expected. Although White-tailed Eagles and Ospreys both catch fish, their body plans are quite different. Osprey catch relatively larger and live fish, which they carry out of the water in flight. They require both strong leg musculature and flight muscles, which in the Osprey body compete for space. This trade-off does not occur in White-tailed Eagles, as their wing musculature is less maximised.

Most fish are caught just below the water surface by extending the talons, without the eagle submerging its body into the water. Large prey, however, are caught in the water and beached by somewhat clumsy swimming and hopping movements, during which the large wings might help keeping the eagle’s head above the water. Larger prey are eaten on the spot, which gives opportunity for other white-tailed eagles to try to dominate the kill, which may result in conflict between eagles. The breastbone extends towards the hind body much more than necessary to accommodate the flight muscles on the breastbone keel (breastbone photo B above), and could serve to protect the internal organs in such conflicts instead. 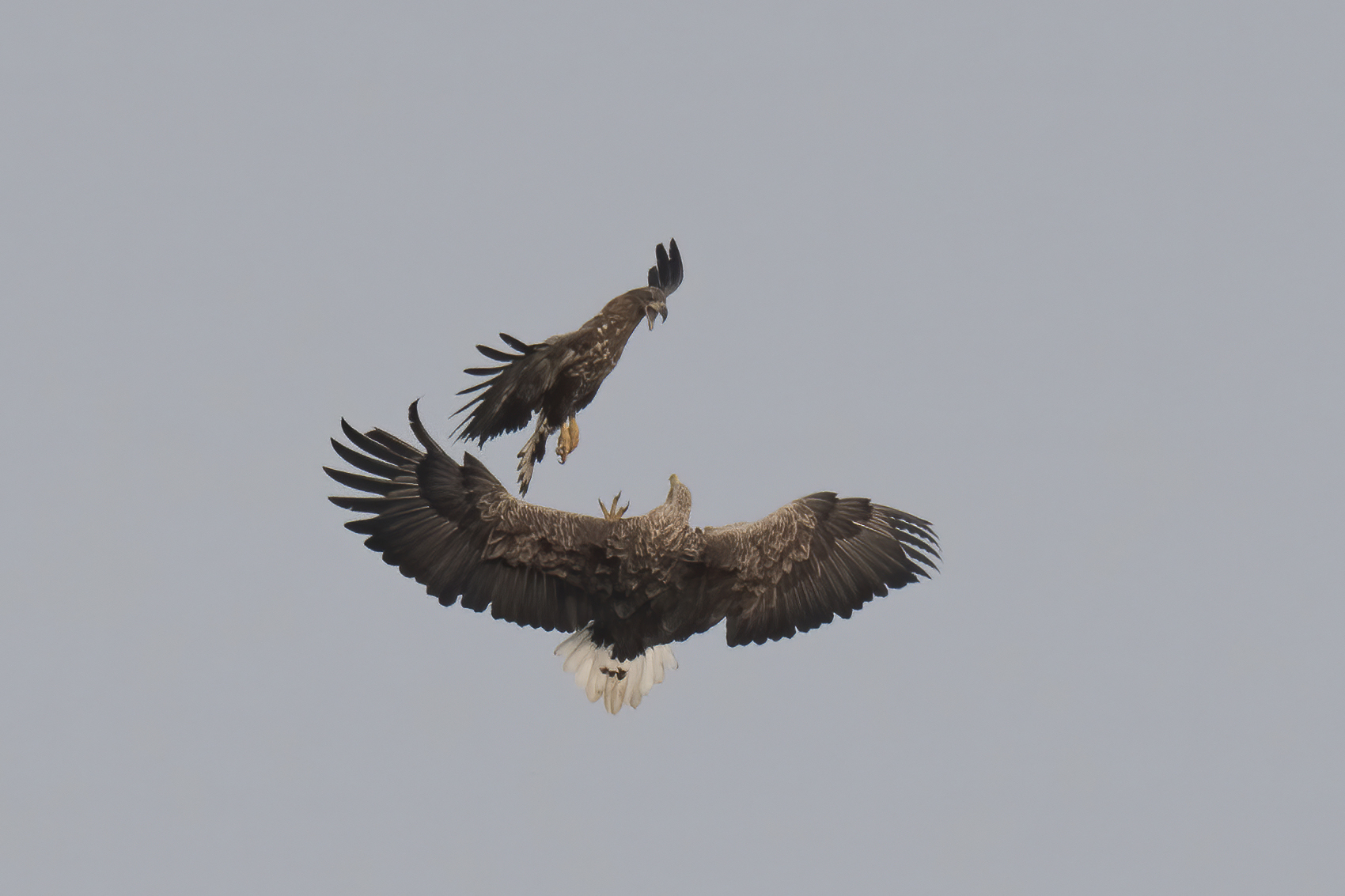 For a bird of prey, White-tailed Eagles have a very long digestive tract, despite having a carnivorous diet of easy-to-digest food (see photo comparison with a buzzard digestive tract). Although the current diet of White-tailed Eagles is quite varied and consists much of meat, they may be adapted to also thrive on a diet solely consisting of fish. In many fish-eating animals, like ospreys, otters, or seals, the intestine is also very long.