How small males and large females team up to survive

Small hunters, large breeders
In few bird species there is such a strong reversed size difference than in Eurasian sparrowhawks (sparrowhawks hereafter), in which males are about 150 grams and females average around 250 grams. Generally among raptors, the faster the prey, the larger this sexually reversed size difference seems to be. Sparrowhawks feed dominantly on fast-flying songbirds and have also evolved to most efficiently chase songbirds in particular, most often from an ambush or stealthy flight. 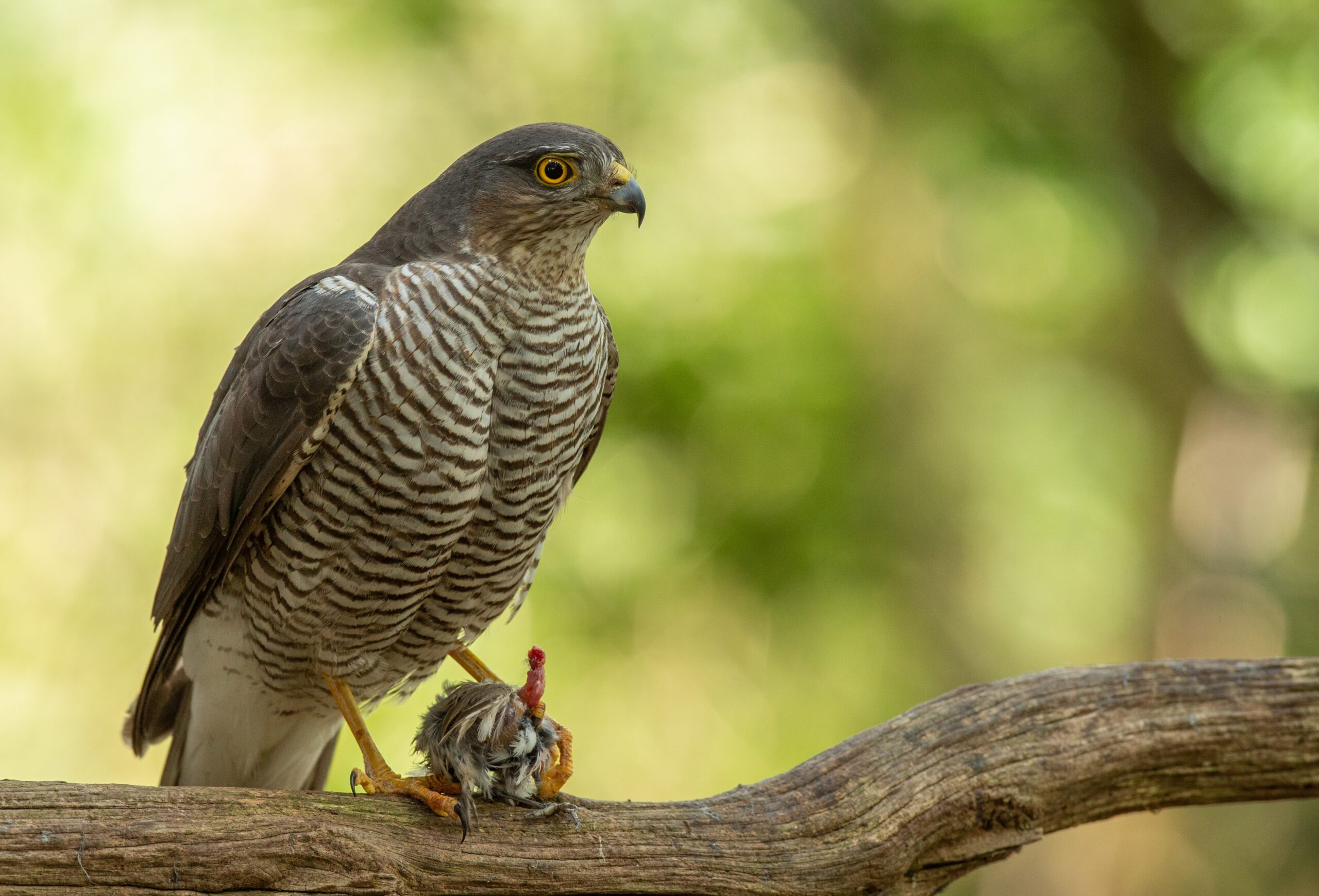 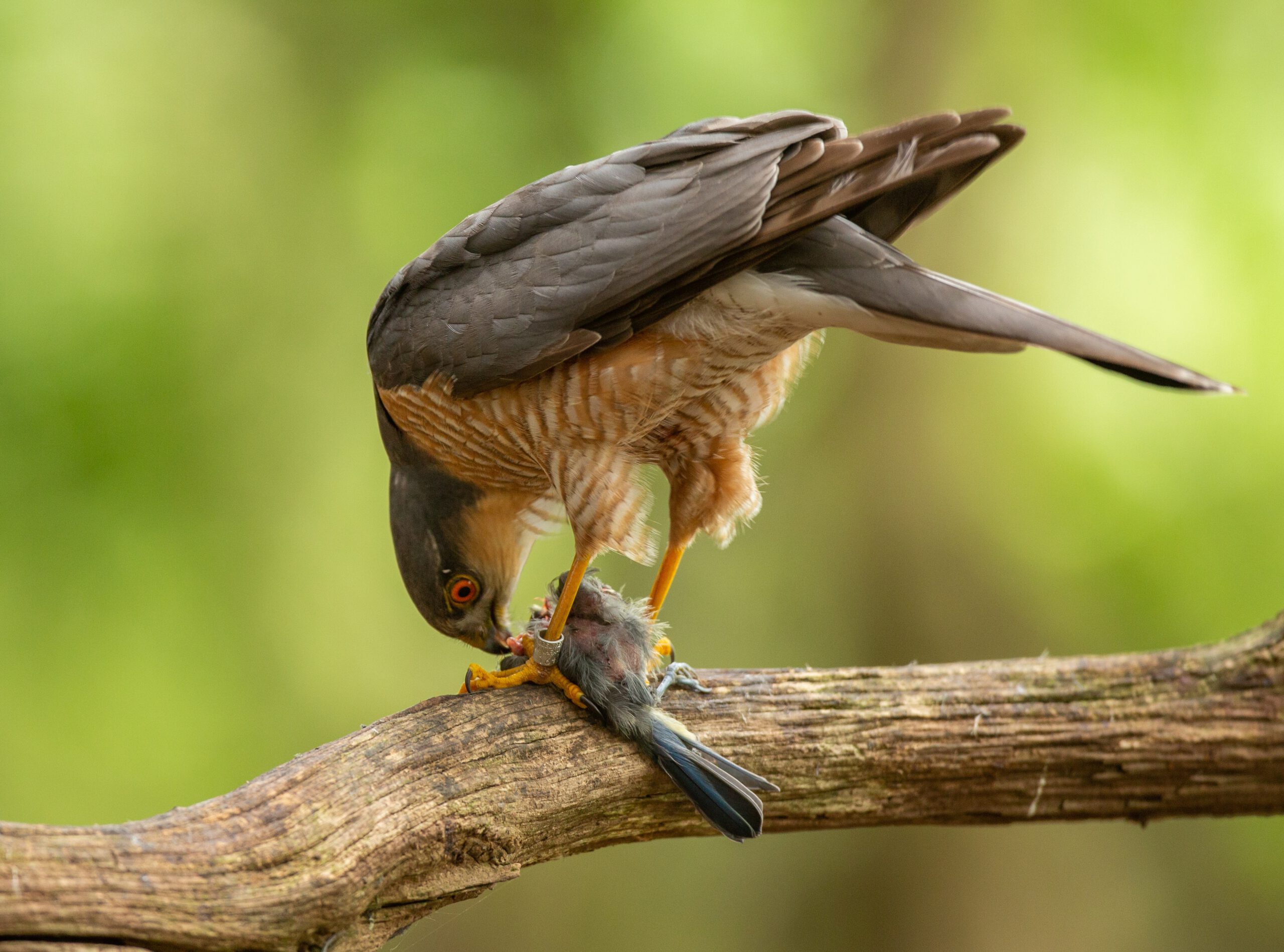 To be agile and to follow the sudden movements of their prey, it pays to be small themselves and to have relatively large wings. Males are not limited by the burden to lay and incubate eggs, and therefore are optimally designed to catch songbirds, whereas the females’ role in reproduction prevents such strong adaptation.

Growing even bigger
Nevertheless, females are skilled hunters that normally feed on slightly larger prey birds than males (though there is large overlap). At the time of breeding the females have to process large amounts of food in order to produce eggs, and to boost their digestion to do so, they enlarge their liver and small intestine up to two-fold. Their body mass typically increases well over 300 grams (up to 358 grams in our studies) after egg laying. During this period females are fed by the males and hardly catch any prey themselves.

Fixed roles
A sparrowhawk generally produces 5 relatively large eggs, which average about 20 grams and require some 35 days of incubation. The chicks hatch fully in down, with their eyes open, ready to receive food from the parent’s beaks. The males keep provisioning the family with food during incubation and the first three weeks of chick rearing. He carries prey to close proximity of the nest, where it is handed over to the female. Away from the nest, she plucks the prey and then shares the carcass among the chicks. Only when the chicks are at least 3 weeks of age, the female may start hunting again. 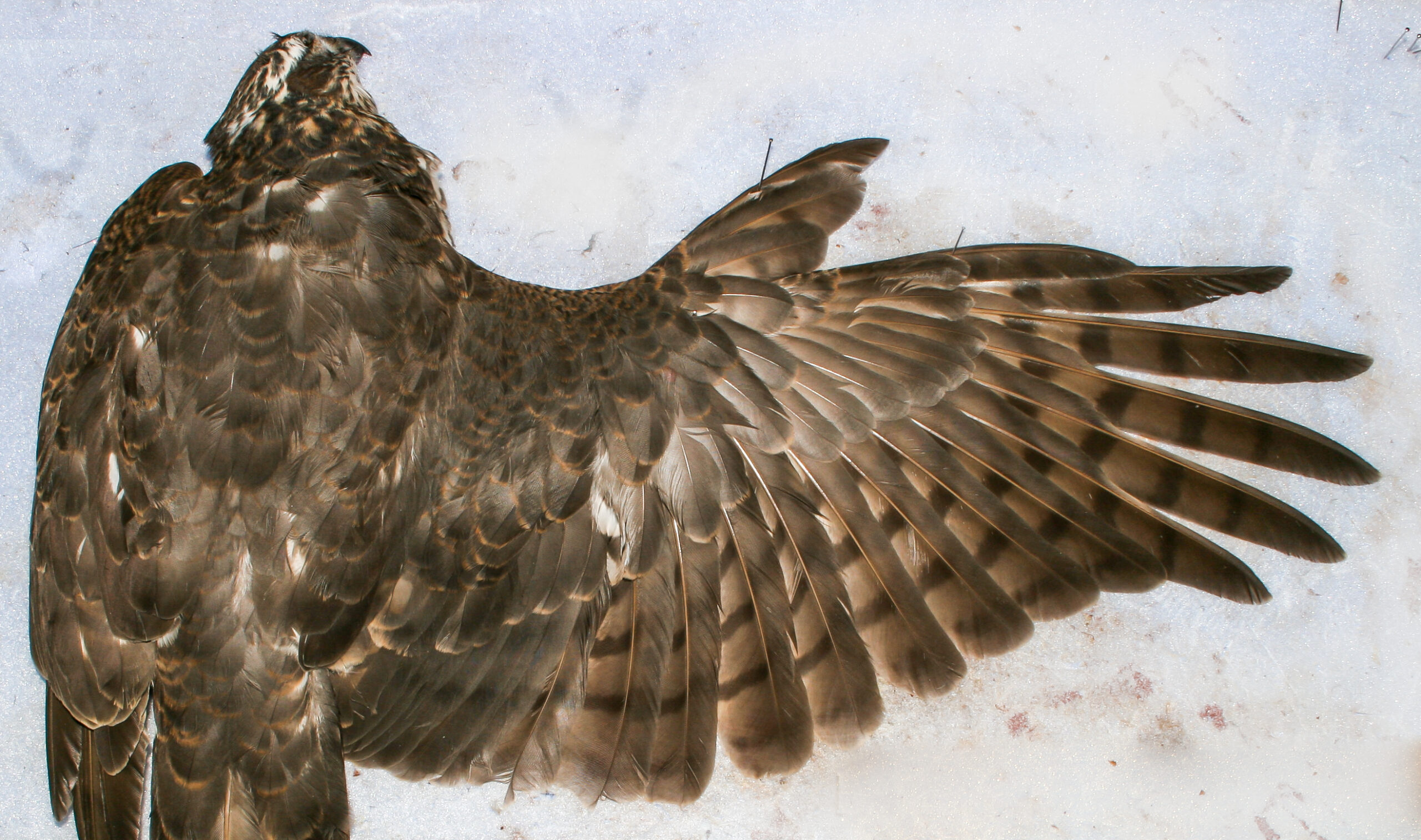 As females have little action during incubation and early chick rearing, they begin replacing their feathers (moulting) at the start of egg-laying, so most feathers have regrown by the time she starts hunting again. Later in summer she moults the remainder of the flight feathers.

The wings are highly slotted (so with clearly distinguishable ‘fingers’), which lower the drag resistance in flight. They also help making sudden turns without flapping or without strongly increasing drag while turning. The wings are broad and short, which suits manoeuvring through dense vegetation.

Quick versus strong
The down strike is powered by large breast muscles, and hence the keel of the breastbone is large, in order to provide attachment surface for the muscles. A long tail helps to maximise agility in flight by acting as a ‘rudder’, and with their long and thin legs sparrowhawks can still snatch (almost) escaping prey. 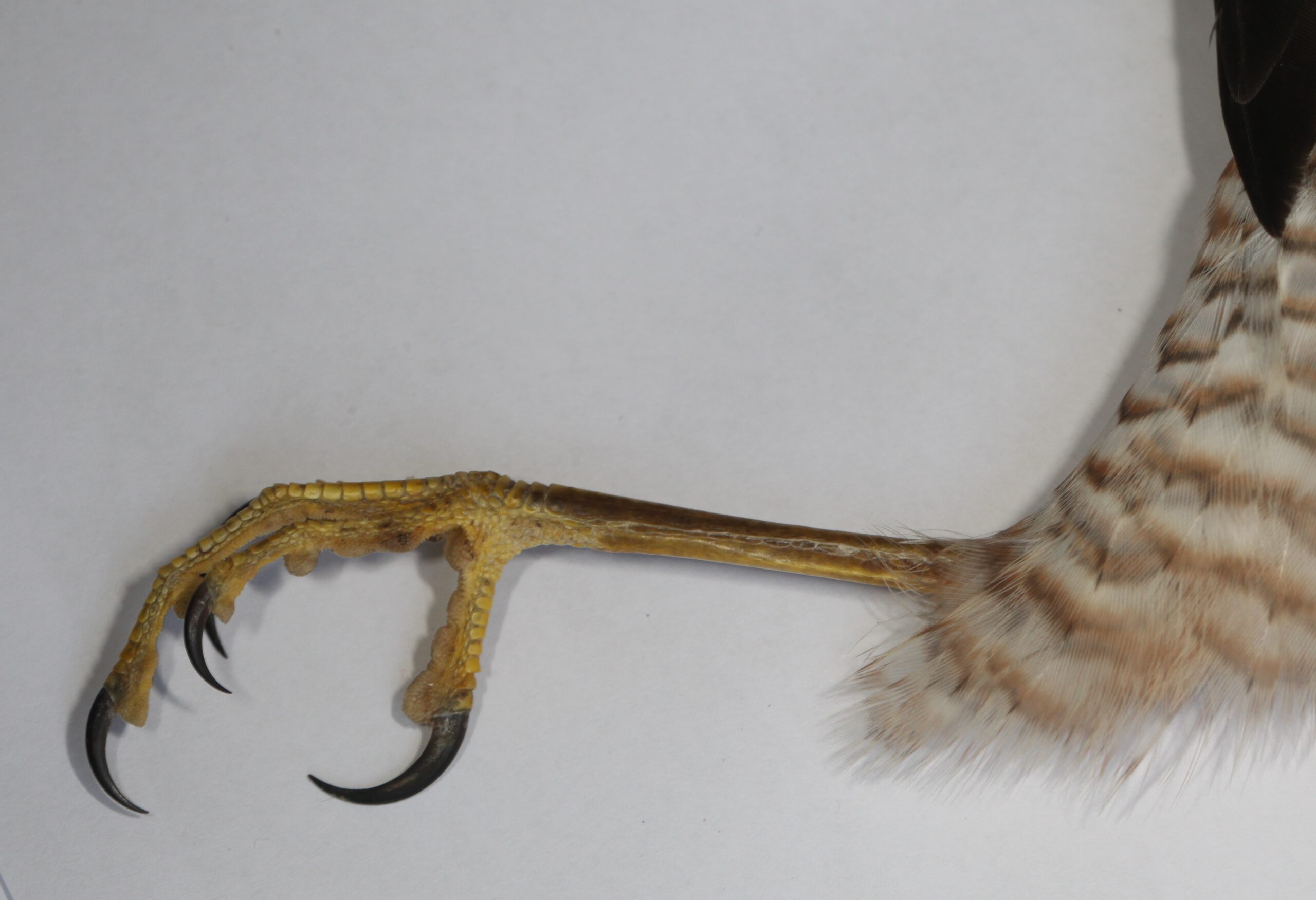 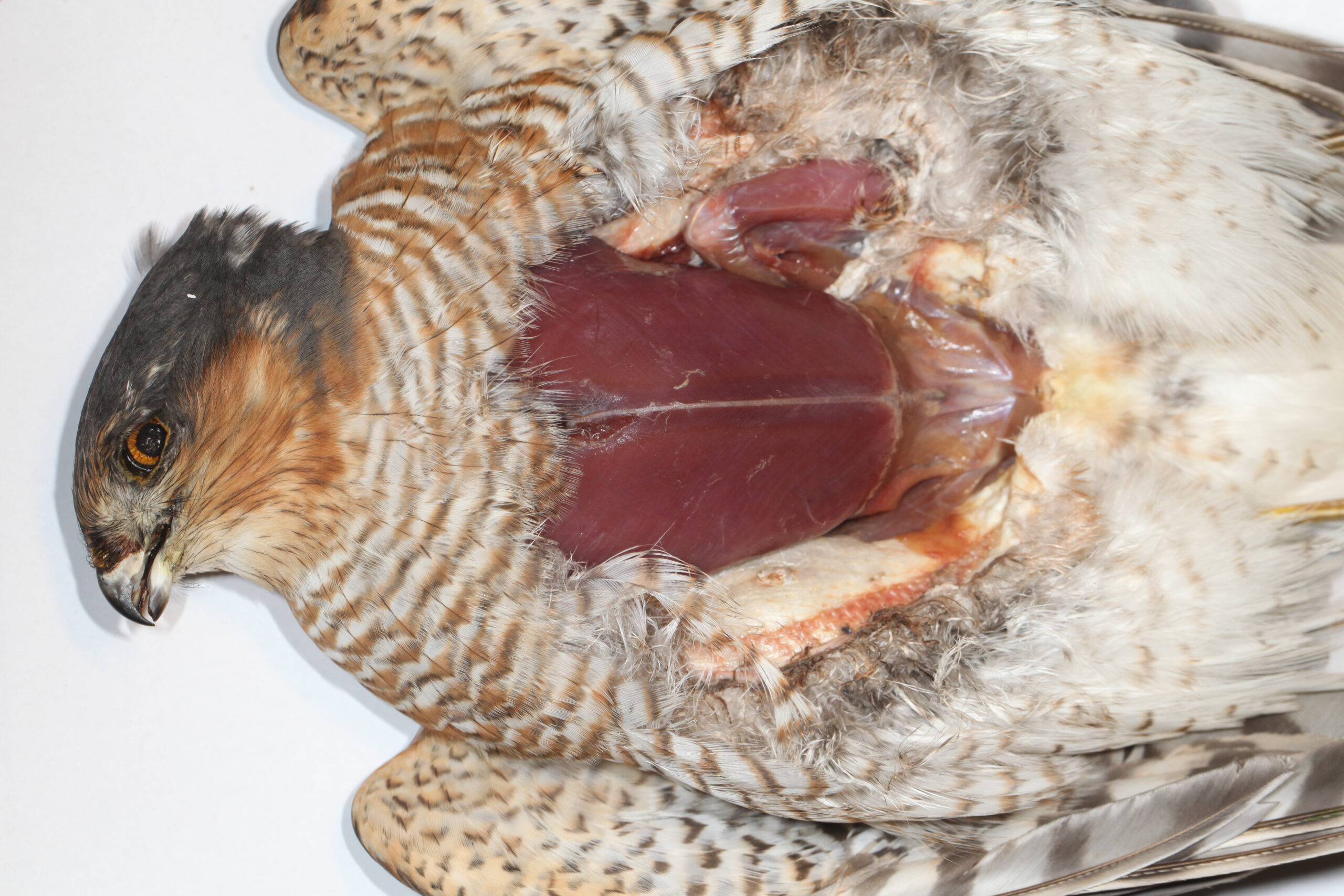 Having thin and light-weight legs, optimised for the quick movements needed for grabbing, results in lower strength of the legs and feet, for example in comparison with northern goshawks.

Hunting fast at a cost
The intestine of a sparrowhawk is short (except in females during the breeding season) compared to other birds of prey, like a white-tailed eagle, which is likely a result of weight reduction to make sparrowhawks faster in order to catch prey more efficiently. 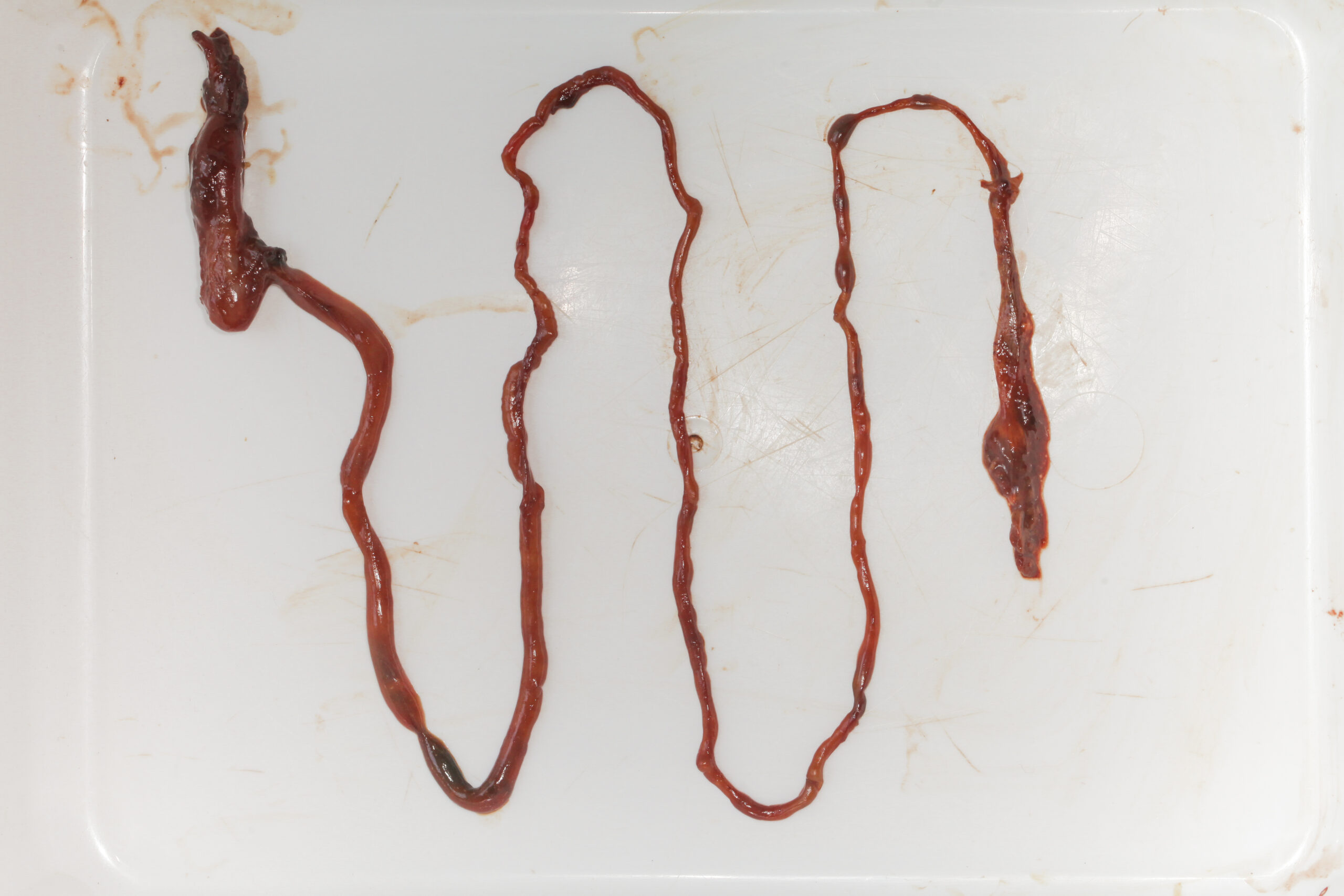 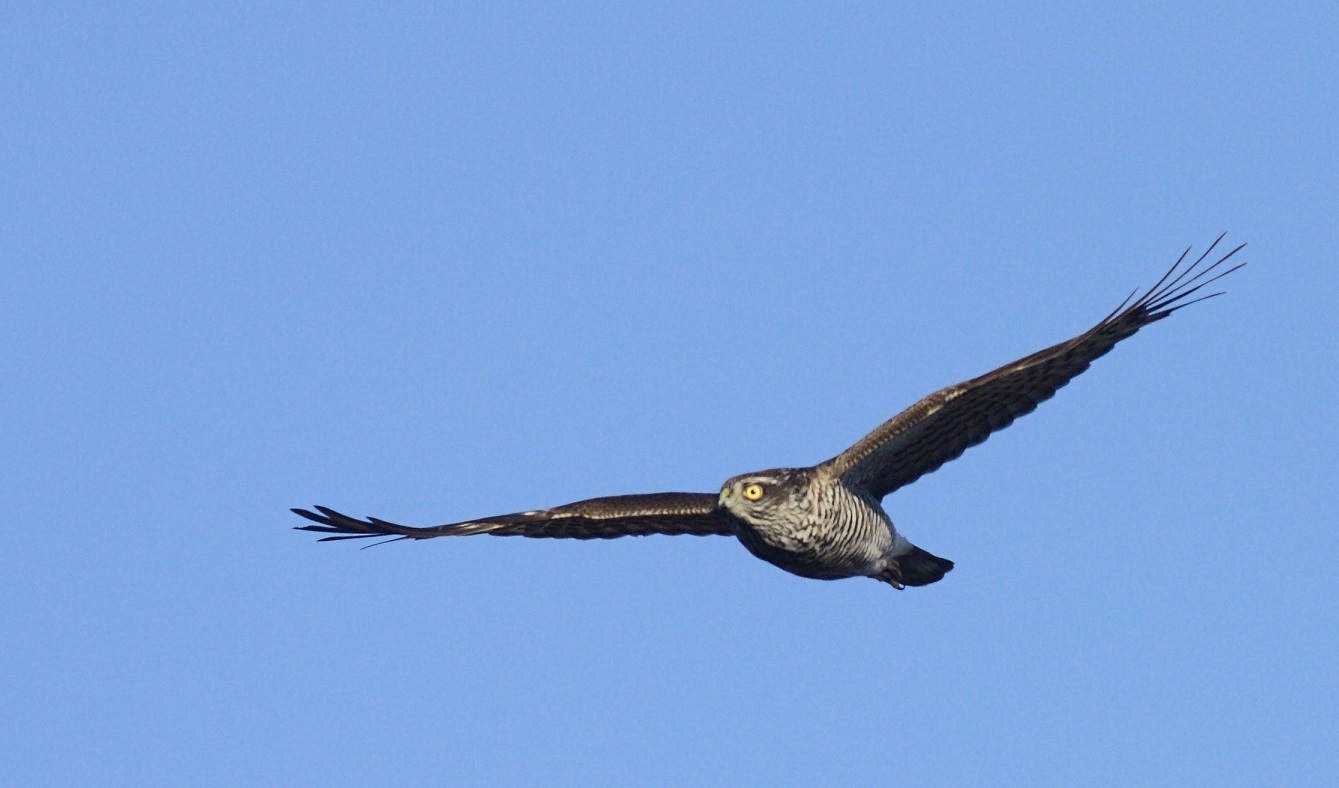 The sacrifice is that a shorter intestine lowers the efficiency of digestion and only allows a small amount of food to be stored in the digestive system at any point of time. So, sparrowhawks rely on regular meals to stay in good body condition, and northern populations may migrate south to ensure a steady food supply.

Blind guts for survival?
Sparrowhawk (and other raptor) numbers strongly declined in larger forests of the Netherlands, where soils have been degraded by acidification and nitrogen deposition. Contrastingly, another carnivore, the tawny owl, still persists. The reason behind this difference in survival of the species seems to be the lack of functional blind guts in sparrowhawks (and most other birds of prey), which tawny owls do have! Due to degradation of the soil, the protein contents in plants drop, making scarce amino acids (the building blocks of protein) even scarcer, up to a level where they even limit reproduction for sparrowhawks. 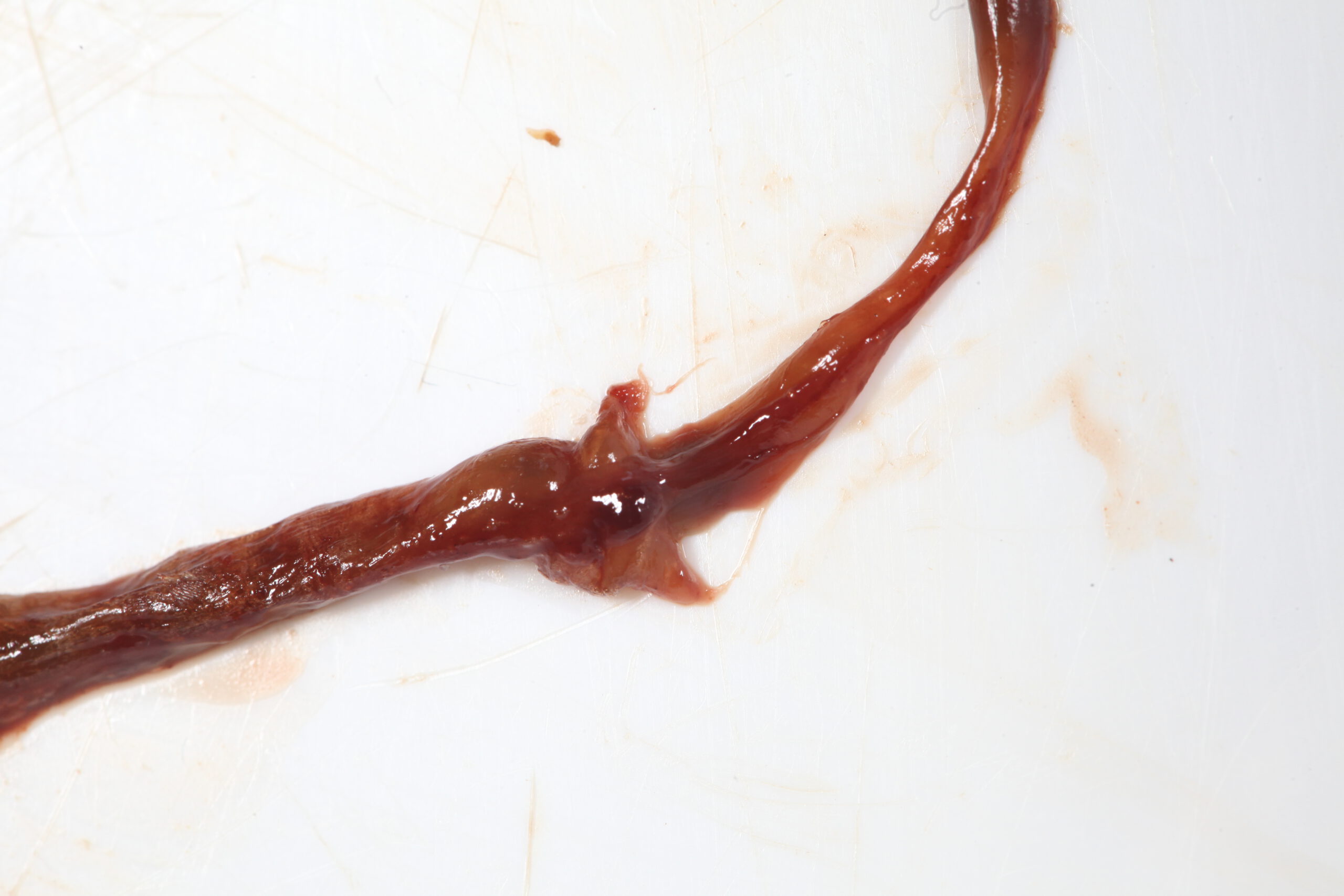 Surprisingly, tawny owls have the ability to produce these crucial elements daily in their blind guts. Here, bacteria convert uric acids, the waste product from the owls’ kidneys, into these amino acids. The amino acids produced by the bacteria are harvested by the owls and enable them to endure in forests which are by and large evacuated by diurnal raptors. 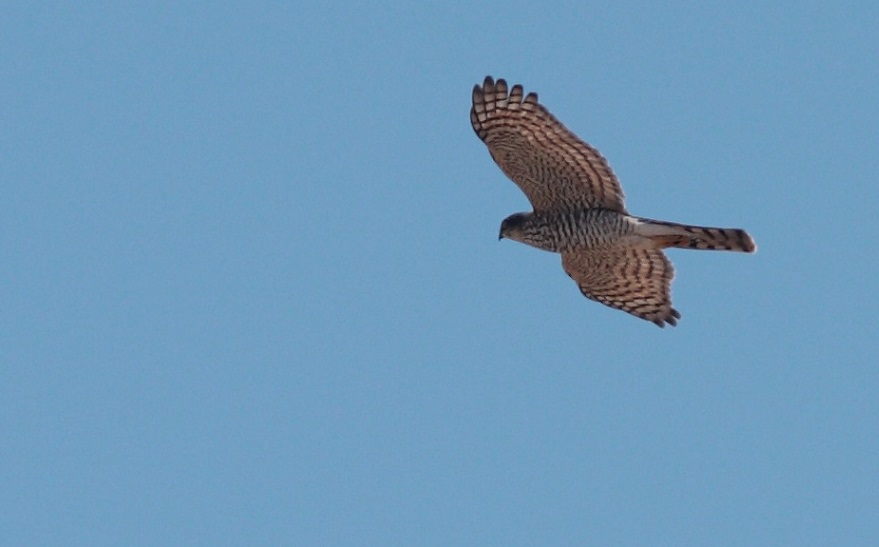